It’s my last Halloween in Wilkes-Barre before moving to Las Vegas, and I’m heading to the F.M. Kirby Center for their annual horror double-feature.

I arrive at the box office early, only a five-minute walk from my apartment, and buy a ticket to Friday the 13th, the original slasher film from 1980. I’ve seen the movie before, but never on a big screen. The theater is only a quarter full, and the response is muted. The audience leans heavy toward teenagers, and they complain about the slow pacing and outdated fashions. Some of the most disturbing scenes illicit laughter.

I leave after the credits roll, and with an hour intermission before the next feature, cross the street to Donahue’s Hourglass, a landmark dive bar currently under new ownership. The moldy smell and threadbare carpeting were gone, replaced by a glass waterfall and those jukeboxes controlled from your phone. The owners must have sunk their kid’s colleges trusts in a remodeling job, and the increased drink prices suggest they’re in a hurry to recoup.

I set the alarm on my phone, so I won’t lose track of time and miss the next movie. If horror cinema is the greatest love of my life, musical theater isn’t far behind. Perhaps, that’s why I’m dressed in my Lin Manuel-Miranda as Alexander Hamilton costume. It also explains why I’m returning to the Kirby Center at midnight for a screening of The Rocky Horror Picture Show. I’ve seen the film countless times, probably more than any other movie in my life. I have a bag of props ready, my callbacks memorized, but I’ve never dressed as one of the characters. I’m 6’3 and don’t possess the body type for fishnets and garters, corsets, or a French maid’s uniform. How difficult would it be to find lingerie in my size?

A man with a bushy beard sits next to me at the bar. He’s wearing a pentagram necklace.

“Excuse me,” he says. “I’m an old man, and I’m taking a poll. How many people do you think have ancient beliefs?”

The man’s eyes lit up when I mention paganism and Samhain. “You must be a scholar.” He said.

The old man removes three stones from his pocket and places them on the bar in a triangular pattern.

“Where did you get those from?” I ask.

The old man waves his hand over the rocks as if modeling jewelry on QVC. His body begins to shake. He blinks furiously, thrice per second. His mouth opens, jaws working as if chewing on an invisible sandwich. The man explains how he derives power from his magic stones. They grant him the ability to manipulate magnetic energy.

“I’ve only done this four times before.” He says, casting his hands over the stones. The ritual seems to pain him.

“Are you okay,” I asked the warlock, concerned he might work himself into a fit. “You don’t look so good.”

“The act itself causes me immense discomfort.” He says. “That’s why I’m a drunk, but don’t worry, I’m able to repel people even while intoxicated.”

I nod my head and agree with him.

The warlock explains how he was a regular at Donahue’s Hourglass before the new owners purchased it. He would even put the old proprietor to bed at the end of the night; former owner Joe Philistine had a private apartment on the second floor. Joe used to run the bar with his brother, John, who passed away many years ago.

One night, the warlock tells me, he was sitting alone at the bar after putting Joe to bed. “I was having a nightcap when I saw the ghost of John sitting on the stool next to me.”

The old man runs out of money, so I buy him a whiskey. He warns me of the shadow people. “The gates are opening!”

“Only the Druids can stop them,” he yells. “But there aren’t any Druids left in Wilkes-Barre.”

I look down at my phone. The time is nearing midnight.

“And they call me mad!” He bemoans.

The old man seems on the verge of tears. The Rocky Horror Picture Show is about to start, and I have to hustle. I buy the warlock another drink, grab my prop bag, and leave.

The Kirby Center is packed, but I’m lucky to grab a good seat. Next week, I’ll see The Rocky Horror Show at my local community theater. Between my viewings of the film, both on home video and at midnight screenings, along with the countless theater productions I’ve seen (including the Broadway revival) the opening chords of “Science Fiction, Double Feature” feels like slipping into a hot bath. 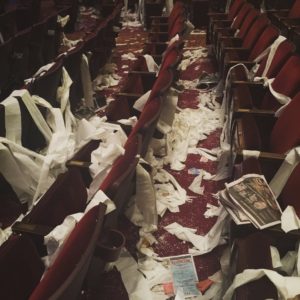 I left Wilkes-Barre at the end of the year before the gates opened, and the shadow people escaped to enact their deadly vengeance. I haven’t been back, so I assume all my loved ones have been killed or enslaved by the dark forces. At least I found another theater that shows The Rocky Horror Picture Show each Halloween at midnight.