Record Number of Spanks at the Heart Attack Grill 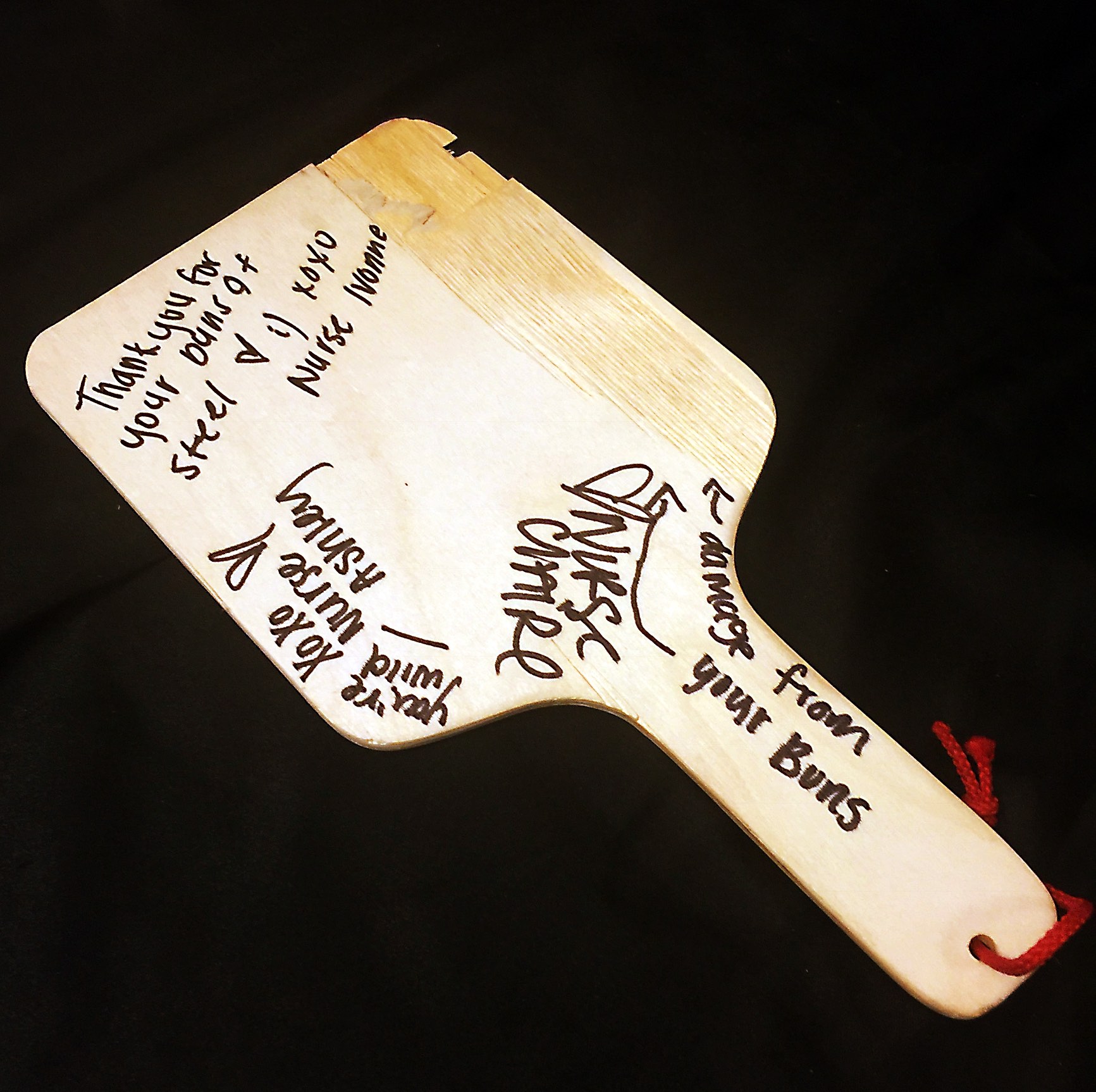 I live right around the corner from Fremont Street in downtown Las Vegas so the Heart Attack Grill is one of the closest places to grab a quality burger and ingest some empty calories. I was with a group of friends visiting from out-of-state and we stopped in for a bite to eat.

The Heart Attack Grill proudly bills itself as the world’s unhealthiest restaurant. There’s a large scale by the entrance and anyone weighing over 350 pounds eats for free. The restaurant is decorated in a hospital theme; the waitresses wore nurse uniforms. I ordered some wine for the table and it came in an IV bag. Our party was given paper-thin hospital gowns to wear over our clothes.

The restaurant is famous for their mammoth, belt-busting burgers and patrons are punished if they don’t finish their meal. Most customers receive three spanks administered by a wooden paddle, square on their buttocks. Spankings occur on the regular, every ten minutes or so, in clear view of the other diners. Patrons lower down their burgers and watch as their neighbors are cruelly punished, relishing the Heart Attack Grill’s twisted idea of tableside entertainment.

I ordered the Quadruple Bypass Burger:  four half-pound beef patties, twenty strips of bacon, and eight slices of American cheese. I purposely didn’t eat anything all day in preparation for the 10,000 calorie meal, but I was unable to finish my burger, French fries, and root beer float. Our waitress, Nurse Ivonne, approached the table and stared down at the remains of my meal. She shook her head, disapprovingly, as if a parent scolding her child for wasting food.

“You’re getting spanked.” The waitress informed me with sadistic glee.

“What’s the most spanks a person ever received?” I inquired.

“You can spank me, but I want to go for the gold.”

Nurse Ivonne smirked and word quickly spread around the restaurant that I intended to break the record. The waitresses smelled blood in the water and each wanted a turn with the paddle; they intended to break me.

“Girls Just Want to Have Fun” by Cyndi Lauper played as I bent over the whipping post. The glass-fronted restaurant opened onto one of the busiest streets in the country. Tourists from all over the world looked in and gawked as I received my punishment; cell phone cameras were out, mouths agape in horror…

Nurse Ivonne drew back the wooden paddle; her muscular arm primed from the numerous other beatings she administered. I braced myself for the pain that was sure to come.

The first blow from the paddle landed square in the middle of my ass. My exquisite pain mixed with fierce determination and I was ready for whatever punishment these girls had in store.

After ten spanks Nurse Ivonne handed off the paddle to Nurse Ashley. “You’re wild, my friend.” She told me.

I broke the record by receiving over 100 spanks in a row. The waitresses signed the wooden paddle and complimented me on my “buns of steel.”

One of the waitresses gave me her number, so all’s well that ends well. Needless to say, I was black-and-blue for days. My friends stayed in town for a few more days and we went out to eat at the Container Park on the following night. I called ahead to find out the restaurant’s policy regarding patrons who didn’t finish their food and to ask if they offered comfortable cushioned seating.