Jam Cruise is a weeklong party at sea featuring nonstop music and entertainment. The bands usually started playing around noon and continued until the wee hours of the morning. This year’s headliner was Dr. John; I’m a fan of many of his songs, including “Right Place Wrong Time.” The good doctor was not wearing his seventy-five years well and got around with the use of two canes, but once onstage, seated behind his piano, Dr. John came alive. He sounded no different from the much younger man heard on his most famous recordings.

In a bit of serendipity, a band from my hometown was playing on the ship. I had never seen Cabinet before even though they are quite well-known throughout Northeastern Pennsylvania. I enjoyed their set and looked forward to seeing them again once I was back on land. 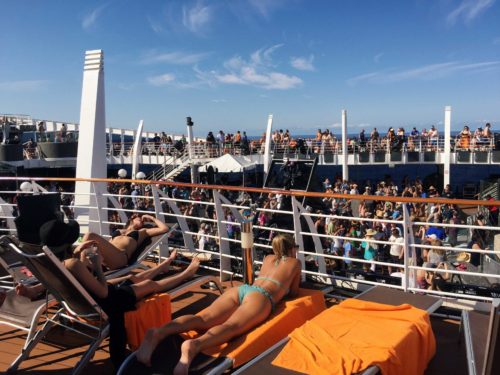 Apart from live music, the ship offered all the other amenities one would usually find aboard a pleasure cruise. The buffet on the top deck was open twenty-four hours a day and replenished often. There were many sit down restaurants on the ship, but I didn’t make reservations at any of them; I heard it was the same food served at the buffet except you had to wait for it. Food came included with my ticket price, but alcohol was not. If you intend to drink during Jam Cruise I recommend sticking with beer or the tropical drinks most popular with vacationers; the bartenders onboard didn’t know how to make many mixed drinks. 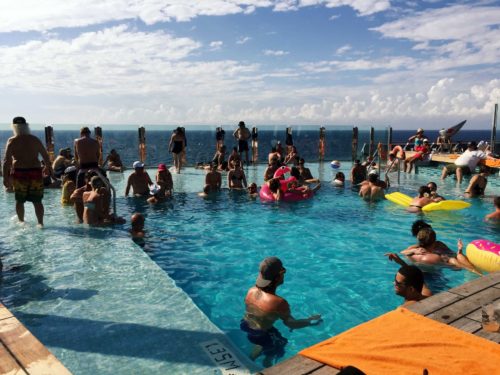 Because this was my first cruise, I bought some Dramamine beforehand in case of motion sickness. I have been aboard many boats before, even deep sea fishing, and never experienced motion sickness. During the cruise, I didn’t feel sick, but on the first day at sea, I found myself dizzy and frequently off-balance.

Before I embarked on my trip, I heard several horror stories about cruise ships. Each year many people taking cruises go missing and are never seen again; maybe they fall overboard or meet some other grisly fate while on a lawless ship in the middle of international waters. There’s a website where you can look up how many people died or went missing on your particular vessel. We were on the MSC Divina, named after sultry Italian actress Sophia Loren. The ship is known for hosting many of so-called “hedonistic” theme cruises; but, compared to some other ships, there have been few onboard incidents and not a lot of people have died or gone missing. The only death onboard the MSC Divina or during Jam Cruise was a guitarist battling pneumonia; the lone disappearance was a young man supposedly jumping overboard to impress a comely female passenger.

One night I locked myself out of the cabin and had to request a new room key from the reception desk. They gave me a new keycard without asking for my name or identification. It would have been too easy to lie about my room number and get a key to the wrong cabin. I briefly considered a new life as a cat burglar, sneaking into every other cabin on my deck and rifling through my neighbor’s items, stealing anything valuable I came across. I eventually decided against embarking on a life of crime and returned to my room.

There were several pay movies offered on the television in my cabin, but I wasn’t interested in any of them. I downloaded “The Poseidon Adventure” through my iTunes account and watched the disaster film on my phone. I’ve always loved the ocean, and I think my fascination with shipwrecks is probably a part of that. There was a period during my childhood when I was obsessed with the Titanic, and I listened to the score from the Broadway musical while working out at the onboard gym; I guess I was tempting fate. If we sank, I decided to go down with the ship. It might have been a tragic enough death to warrant a Wikipedia page.

Initially, the cruise would have taken us on a route through the Atlantic Ocean, stopping at Belize and Costa Maya, Mexico. The night before our first scheduled docking a paper containing the ship’s revised course was slid underneath every cabin door. It turns out the Jam Cruise wouldn’t be sending anyone to Belize. Instead of Belize, we docked at the island of Cozumel. I would have enjoyed visiting a different country instead of making two stops in Mexico.

It was difficult adjusting to life without my cell phone or Wi-Fi. I lost the signal on my iPhone a few miles out from Miami. You could purchase Internet at the ship’s cyber cafe, but it was very slow and expensive. When we stopped in Mexico, I was able to find a beach that offered free Wi-Fi and cheap massages.

When the ship finally docked back in America, and my signal returned, I received some bad news: David Bowie had just died. What a harsh way to reenter the real world after a carefree week of sun and sea. Bowie was one of the artists that instilled in me a great appreciation of music. He shared the same ethos practiced by the Jam Cruise: radical expression, personal freedom, and diversity exemplified by music, the common bond we all share.